Posted on October 22, 2013 by meh9 | Comments Off on Invasive, Sex-Crazed Cannibals 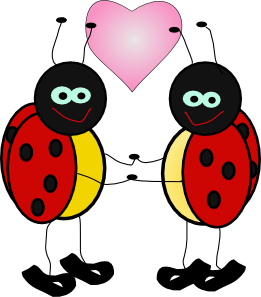 The popular perception of ladybugs. Clipart by Marketa Bauerova.

I was studying outside the other day when I began to notice a couple of small, alligator-like insects circling the outer rim of my table. Curious about these little creatures, I let one crawl onto my hand. It looped around my fingers for a while with surprising speed until I placed it back down and it continued its little circuit around my table.

Using the internet’s infinite wisdom (this website in particular), I was able to identify the insect as a ladybug* larva. In particular, it was an Asian Multicolored Lady Beetle, or Harmonia axyridis. The first things that I discovered about my new friend is that it emits a pungent odor and sometimes bites. I looked down again at the bumpy insect squirming around my table with a newfound sense of disgust, hoping it hadn’t left it’s odorous mark on me.

And that was just strike one for this ladybug.

I was talking to a friend a little while later when our conversation was cut short by the sudden appearance of a larvae falling out of my hair. My voluminous hair has been known to consume anything from bubble gum to bobby pins, but this was certainly a first. Even later, I found one squished in between the pages of a textbook. I knew that I was either very unsanitary, as my friend now suspected, or that they were so common that all of these interactions were not improbable. In any case, I knew that there would be some interesting science behind my insect encounters.

These lady beetles have been shown to be highly successful in controlling aphid pest species, as intended. An adult eats roughly 60 aphids per day, and even smaller larvae eat around 25 aphids per day. However, the benefits to humans only last through summer and spring. Around fall, they migrate in masses and become a common pest. They flock to houses and other man-made structure as winter approaches to hibernate in cracks and crevices. Their massive aggregations stain carpets, curtains, furniture, and more.

Because they’re such highly generalized and effective predators, they’re also harmful to many native and non-target species. On top of depleting the food source, they actually eat the eggs of their native brethren (this type of predation is called intraguild predation — it’s literally a ladybug eat ladybug world they live in). Although native species’ larvae also prey on Asian lady beetle eggs (not so cute, eh?), according to this Journal of Insect Science article, the Asian lady beetle is just better at it. Overall, they’ve made a positive impact in some areas of pest control, but are largely considered a model of the dangers and failure of introducing new species as biological controls. 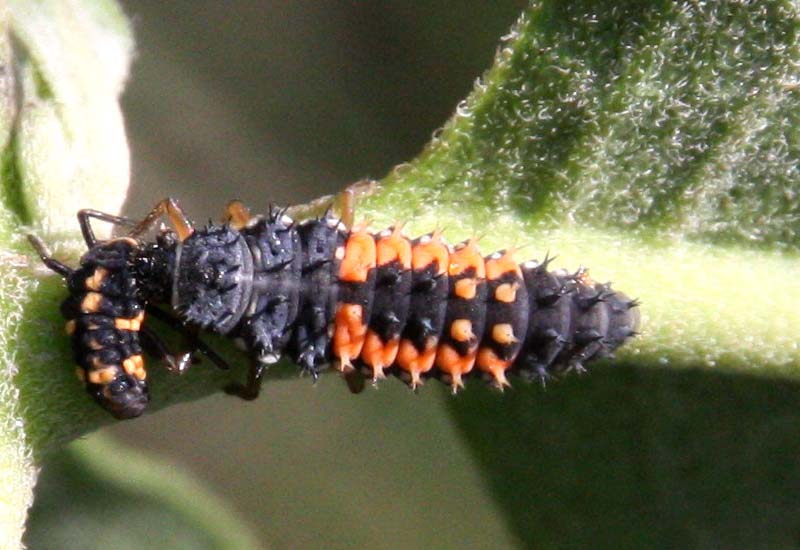 The Sex and the Cannibalism

Two ladybugs eating a dead ladybug. Photo by Maria F., WordPress blogger. You can read her story about this image by clicking the image.

*DISCLAIMER: The term “ladybug,” is actually a misnomer. Ladybugs are small beetles of the Coccinellidae family, and not true bugs (true bugs belong to the insect order Hemiptera). I often refer to these lady beetles as ladybugs because that is how they are colloquially known.