Now, I’m usually no fan of mosquitoes, cockroaches, or really any creepy crawlies that can be considered pests, but I have quite a beef with one group—gnats.

Whereas most insects somewhat seem to learn their lesson after being shooed away, gnats are persistent buggers—pun incredibly intended—that have no regard for consent. If you’re enjoying a sweet afternoon in the park, you’ll find them hovering over your head and even if you move away, they’re still there. Not alone, I might add! They tend to form these clouds around your head and kind of make you like Pig-pen from the Peanuts comics. If that’s not annoying enough try getting a mouthful of these barely visible guys while biking or running along a trail, which I may or may not have done (I did).

As a dedicated pretend scientist, however, I was really curious about why they tend to surround me and also how they choose their fixed positions to swarm.

It turns out that the term “gnat” is a group name for specific insects belonging to the order Diptera, sub-order Nematocera. Because of the eclectic term, gnats can be quite diverse. There are even some biting gnats that can be parasitic pests whose bites may lead to severe allergic reactions. I’m more interested in the non-biting type, though.

One of these types is the fungus gnat, which can belong to the families Sciaridae or Fungivoridae, which I will use as examples of gnat behavior. 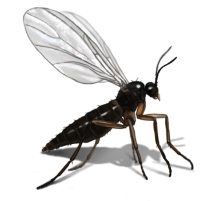 Fungus gnat males actually tend to assemble into those cloud shapes in order to increase their chance of mating; these clouds are appropriately called ghosts. So while my title may be a bit of a violent image, it isn’t necessarily inaccurate, now is it?

Well, that answers my question of what they’re doing (or who), but how do they choose their location? As the name suggests, fungus gnats tend to seek damp, humid areas where fungus might grow, or more generally areas of decaying organic matter. After copulation, the females will seek these areas for their larvae which can only burrow and eat, due to their holometabolous life cycle. This cycle, however, has earned gnats the title of pests from farmers and gardeners. This mostly has to do with the fact that the larvae will destroy plants by eating away at the plant roots. Consequentially, the male gnats swarm near any green, moist environment suitable for their offspring.

Awesome, but with all the plants about, why follow me?

There seem to be two explanations for this. One of them is quite simple actually. Sitting outside on a hot summer day, I, and every other human, tend to sweat and become hot—in effect, becoming a warm, humid environment. This (literally) sexy combination causes the gnats to surround my face as it has become the hot new bar in town. This is further visible, if you’ve ever seen them surrounding a dog’s or cat’s eye as they are attracted to the wet environment of the eyeball. Additionally, breathing out carbon dioxide at a higher concentration also attracts them. There is a third explanation, though I couldn’t find much more evidence, from Lori Eberhard that suggests gnats are attracted to sweet smells and considering how many products are needed to maintain this hair, I might just be their Willy Wonka!